You guys remember Unsolved Mysteries? Of course you do. This spooky guy telling his spooky damn stories about crimes that haven’t been solved. People doing spooky things that leave you awake all spooky night. It was a great show, and like most great shows, it spawned some imitators. Rescue 911 wasn’t quite the same, but it kept us occupied with William Shatner while a few of us started to realize that he and Robert Stack basically played the same guy in the Airplane movies.

I can’t prove that 911 Operator was directly influenced by the emergency-laden yarns of Rescue 911, but it’s certainly the first thing I thought of when I played it. You play as a 911 dispatcher taking in a chaos of calls and assigning police, fire, or medical to the appropriate situation. Sometimes you’ve got to combine them. Send a fire truck to take care of a burning building, and you might have to follow it up with an ambulance for burn victims. A simple speeding situation might require more than one police officer on the scene in case the schmuck in the Maserati decides he wants to light things up.

It’s a pretty basic premise that leads to some simple, if stressful fun. Between shifts, you’ll receive a budget based upon how well you did, and while I don’t think it’s terribly fair to ask the guy who makes 12 bucks an hour answer phone calls to also take inventory and spend the budget, it adds a level of planning and inventory building that keeps the game fresh, for a little while at least.

The voice acting is a nice touch, as well. Instead of just reading the text of your calls, you’ve got actors portraying people sometimes having the worst days of their lives, and that adds a little extra. When you’re playing in the career mode, you move upwards toward larger cities with bigger problems. But my favorite had to be the open world mode, where you just play indefinitely. The game noticed that I live in the Atlanta area, and asked if I’d like to play there. Now I can think of no greater hell than to be a 911 dispatcher in Atlanta, but in terms of a video game, it was pretty fun. And the use of actual Atlanta streets and locations added a personal feeling to it that genuinely impressed me. 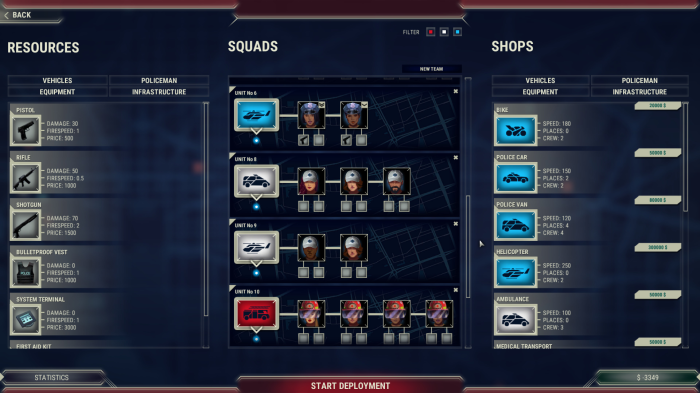 Of course, with those extras aside, it’s really easy for 911 Operator to get pretty samey after a while. You can invest in new vehicles, staff, and equipment, but the gameplay itself stays largely the same, and whether you’re willing to invest a massive amount of time in that really depends on how much you like sending firemen to save burning buildings. But I don’t regret the time I spent playing 911 Operator. The developers of the game did a decent job making it unique and engaging, and the modding scene is all over it, creating new situations to respond to in an effort to keep things fresh. Ultimately, with its simple interface and gameplay, the developers at Jutsu Games might do well to port 911 Operator over to mobile. I can see this game doing really well among the crowd that likes a casual, fun game to play in bed at night. As long as whoever you share a bed with doesn’t mind you shouting about needing backup every fifteen minutes.

911 Operator was developed by Jutsu Games and published by Playway S.A. It is currently available on Steam for 14.99.