Oh, Dark Horse. How I love your disturbing picture books.

It’s true: my admiration for 1993’s Grendel: Warchild cannot be properly summarized without pointing out that when I was growing up, there were essentially three comic book publishers: DC, Marvel, and Dark Horse. You could pick up an issue or two of any number of books–usually missing issues here and there due to the fact that we were kids and some of our moms refused to take us to the comic book store every Wednesday. Bless my mom’s heart: the Satanic Panic of the 80’s and 90’s hit her pretty hard, and I had a hard enough time hiding my Dungeons & Dragons collection from her without resorting to explaining why Grendel was actually art.

Dark Horse, you see, was always what the older kids read. What the soldiers picked up while grabbing staples and snacks.

We wanted to read those books.

Years later in my adulthood I come to find that a lot of my faith in the grandiose and beautiful nature of “adult” comic books was misplaced. “Adult” comics in the 90’s sometimes meant deeper storylines and heavier themes, but mostly meant gore and tits. And while both are present in abundance in Grendel: Warchild, this is not a book that disappoints.

Taking place decades after the original Grendel storyline, Warchild follows Grendel Prime (a cyborgwarriorjedigodthingie) as he protects the heir to the empire of the world. It’s On The Road with laser swords and Machiavellian intrigue.

Going through it all this time later, I’m reminded of all the good that the 90’s did for comics. I’ve written in the past about all the bad it’s done, because it’s so easy to glom onto the boobs and Liefeld and contrived storylines and Liefeld and sexism and Liefeld. But lots of good came from the 90’s, too. And by good I mean absolute, unadulterated (and yet, well-written) insanity.

This book is fucking crazygonuts.

Grendel Prime fights his way through zombies, massive reptiles, samurai in red paint, African tribesmen (who for some reason talk in a bad Jamaican accent a la World of Warcraft), leper cultists, giant apes, robo-pirates, and a cabal of vampires who take their fashion sense from Kurt Cobain. Every chapter there’s something different, and I’m pretty sure Matt Wagner would have thrown in a chapter with ninjas if Dark Horse would’ve sprung for a twelfth issue. 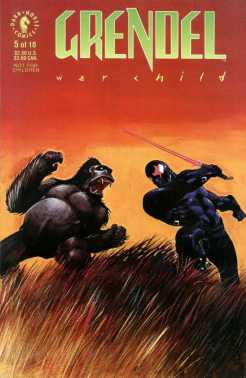 And it’s fun as hell. The artwork is dynamic and fluid–the characters (and there are more than a few) are well designed and unique. And while the last chapter falls into a massive hiccup with its abrupt “Ten Years Later…” shift and introduction of a faceless narrator, it’s otherwise some of the most fun I’ve had reading an action comic now or in 1993.

If this was one that you passed by in the past, I’d pick it up and give it a read. More of a massive, unique world–excellent stuff. Crank up the Pavement–get your 90’s on.