“Remember,” Ian Doescher says in the afterword of The Empire Striketh Back, “This isn’t scholarship–it’s fun.”

And with sincerest respect to the author of the follow-up to Verily, A New Hope, I disagree. But only because I happen to believe that it’s both. While it’s true that I had my issues with his first installment of William Shakespeare’s Star Wars, it was honestly out of love and respect for both source materials. And after reading his second entry, I can say that it won’t stop there.

Doescher has set up two sets of Death Star-sized shoes to fill, and while it’s true that you can’t please everybody, the attention to detail paid by Shakespeare nerds can only be overpowered by the legendary nit-picking of a Star Wars nerd. Being that I’m a little bit of both, I feel properly authorized to examine this new/old trilogy. And to quote the infamous Bill of Kill Bill fame, “I’ve never been nice my whole life, but I’ll do my best to be sweet.” 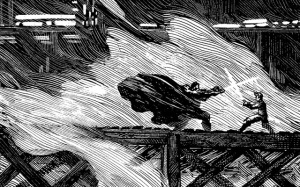 Right off the bat, we’re given two nods to the Bard–including a speech from the murderous Wampa that is easily 50% flat-out lifted from Snug the Joiner’s “Lion Speech” in A Midsummer Night’s Dream. This is only the beginning of what will end up being entirely too many lifts and “nods” to Shakespeare. Immediately I am not sure what to think. I’m looking for the bleakness of the original Empire Strikes Back, given a firmer foundation through the high stakes gore that a Shakespearean tragedy offers. And throughout the play, it’s clear that it has moments like those. But the vast majority is made up of what I’m forever henceforth referring to as “Talking AT-AT Moments”.

I was truly intrigued at how Doescher would solve the problem of the grandiose AT-AT battle on Hoth in this installment, and was only somewhat amused to find that the AT-ATs would be portrayed by actors who would berate the enemy, give speeches, and shout out death cries. It’s a cute idea, I guess. But a handful of actors portraying wisecracking, skyscraper-tall death vehicles completely and entirely undercuts Empire‘s more sincere moments (we’ll get to them later).

The Empire Striketh Back suffers from a perpetual self-awareness of how cute and novel it is, which ruins any real chance it has of being actually cute and novel. And that’s how we get talking AT-ATs. In Verily, A New Hope, Leia’s “You’re a little short for a stormtrooper” line is replaced with a clever monologue that is well written and does great justice to Shakespeare’s style. In Empire Strikes Back, Han’s esoteric cries of hydrospanners and horizontal boosters only work because they’re quick shouts during a thrilling chase scene. In Empire Striketh Back, they are expanded needlessly into lengthy chunks of asides that can only be described as horribly dull. This mistake is repeated again in the scene during which Admiral Piett witnesses the changing of Vader’s mask, and delivers a monologue that belabors the embarrassingly obvious and over-used metaphor of having masks on both the outside and inside.

Now to be fair, I’m not asking Ian Doescher to reach the heights of literary genius that Shakespeare did–that would insane and worthless. But moments like these feel padded and superfluous.

Despite all these complaints, there are moments where Empire Striketh Back is just sublime. Boba Fett’s first speech (written in Shakespearian prose to distinguish him as a member of the lower class) is, to borrow a phrase from Plato, just epically badass. It appears that nearly all of Doescher’s best moments are saved for the villains. The Emperor’s dialogue is truly fitting for this setting, as he already had something of a grand, Elizabethan bent to begin with. His dialogue (what little there is) definitely feels the most natural, and I’m looking forward to how his character is utilized and written in July’s The Jedi Doth Return.

But if there’s one thing that Doescher deserves sincere credit for, it’s his development of Yoda’s voice. Yoda’s already-irregular speech patterns have been adapted to the Japanese 5-7-5 of haiku.  It’s a simple decision, and it makes all the difference in the world. You truly appreciate the fact that he and Luke are literally from two different worlds. It’s a blending of East and West that I wouldn’t have thought to use, but there’s no denying that it works beautifully here. Yoda’s sincerity and his simple but gorgeous dialogue makes him the absolute best part of The Empire Striketh Back.

It’s not an easy thing to blend two massively popular and important pieces of culture, particularly when they are separated by time and style in the way William Shakespeare and Star Wars are. And the last thing I want to do is discourage or put down a writer who has clearly tried so hard to consolidate the two in such a creative way. Ian Doescher is skilled and talented writer–of that there can be zero doubt. But too much of this series leaves me cold. It’s possible that I’m taking it all a little too seriously (Star Wars nerds are known for that), but all I’m truly asking for is a little more attention to the grand scope of both Shakespeare and the Star Wars universe. Both are massive and beautiful, and it does both a disservice to spend the majority of your work playing the “did you catch the reference?” game.

And therein lies my main problem with this series. I mentioned it in my review of Verily, A New Hope, but there’s just too much “wink, wink, nudge, nudge” in these books. And that’s not to suggest that I don’t want this book to be fun. Shakespeare is fun. Star Wars is fun. But Shakespeare and Star Wars also have elemental levels of high drama and tragedy within them–and when we elbow the audience too much, asking “Get it??” over and over, we quash some of those beautifully high stakes.

And to Ian Doescher’s credit, there are some truly wonderful moments here. But the majority of the books seem so obsessed with the novelty of what they’re doing that they lack serious heart. That won’t stop me from picking up The Jedi Doth Return in July, however, as this remains a series that belongs on every uber-nerd’s shelf. 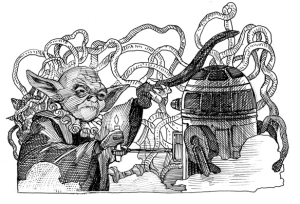 COMING SOON: The Conquistadork gets political with Democracy 3 and devours supporting cast gossip with Judy Greer’s I Don’t Know What You Know Me From.