It’s impossible to play Blue Bottle Games’ retro-style RPG NEO Scavenger and not think of the original Fallout.  This is not meant to be an insult–to suggest that the designers behind this post-apocalyptic piece of roguelike did nothing but stand on the shoulders of giants to get where they are.  On the other hand, it isn’t meant as a compliment, either, given that NEO Scavenger tends to be slower and far more brutally unforgiving.

NEO Scavenger strives to be a survival simulator, and in that sense it certainly seems to have succeeded.  All of us in the Kingdom of Nerd are very fond of the post-apocalypse genre–from Fallout to the endless glut of zombie horror titles that exist.  It seems to be a favorite of ours.  And a lot of that has to do with the fact that no matter what–we see ourselves as absolutely necessary.  We are the protagonists in the grand Story Of Me, after all.  Throw that Story into an unforgiving wasteland of mindless terror and desperate choices, and we still see ourselves as the Alpha Dog.

Or, at very least, appearing in the supporting cast.

NEO Scavenger strips us of all of that.  This game is brutal, and it doesn’t take long for the player to realize that.  After a brief character creation process, you wake up in the standard mysterious testing labs of every nightmarish landscape game you’ve ever played in the past.  From there, you find yourself in a hexed off wilderness, making the decision to move, scavenge, rest, etc.

Though there is an overarching plotline, your immediate goal is to survive.  And by immediate, I mean that in a very… well… immediate way.  You begin wearing nothing but a hospital dressing gown, and it’s damn important to find something warmer to put on: my first game ended in about ten minutes after I died of exposure.  A quick scour of the very tiles around you could lead to a new pair of jeans–perhaps some boots (although not necessarily both of them).

Scattered items such as broken shards of glass and pieces of twine can be combined together in what turns out to be a fairly satisfying crafting system.  Recipes can be found in various abandoned areas, but it’s absolutely encouraged that you toy with different combinations to find them out on your own.

Newly acquired and assembled items are fitted, Resident Evil-style, into a limited grid space, the size of which depends on the container you have.  A rucksack would be perfect to fit all of those bottled waters you found in that burned-out hospital, but until you find one of those, your plastic grocery bag will have to do.  The process of learning to survive is grueling–you will spend quite a bit of time starting over after an inevitable death.  But if you’re patient, the rewards for sticking it out are pretty great.  As I mentioned before, there’s a plot line in NEO Scavenger, but the majority of your time will be spent on finding your next meal, or a warm place to sleep. 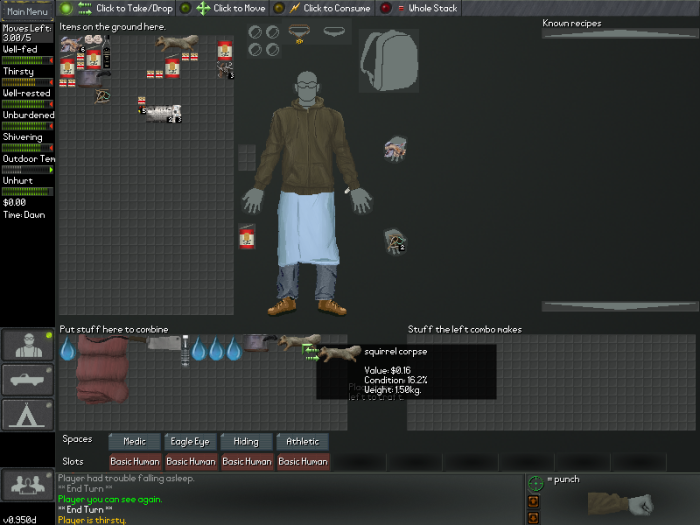 But don’t forget to watch your back: you aren’t, after all, alone in this world.  Combat is just another example of how unforgiving NEO Scavenger can be.  In my experience, you almost never run into a raider or bandit who isn’t armed with a shotgun or a ball and chain he fashioned out of back issues of the Weekly World News.  And always at a point when you consider yourself lucky to have a tree branch to fight people off with.

These inevitable confrontations are even more slow-going than the standard turn-to-turn procedure of the game, encouraging a more thoughtful approach to your martial decisions.  Even victorious battles can end in a wound that will kill you down the line, so caution is always advised.  My advice?  When in doubt, run like hell.

I wasn’t in love with this game when I first started, but have found myself returning again and again.  Like many indie games of these past few years, NEO Scavenger’s superficial simplicity belies a depth that I found to be extremely engaging.  I’ll admit that its difficulty and learning curve (this game takes precious little time teaching you how to do anything) may keep it off of many peoples “must play” lists, but if you’re looking for a challenging survival sim with no lack of replayability, you can’t go wrong with this one.

NEO Scavenger was developed by Blue Bottle Games and is available on Steam.